We had a little extra time this morning as we needed to wrap things up at the Seronera Sametu Camp, say our good-byes and begin our long drive to Ngorongoro. Had a great breakfast to start the day, just like always. This crew has been so amazing – it’s hard to imagine what the next one will be like. I left this morning with the GoPro on my head, first time using it so we’ll see how it turns out. I know it won’t show distance but I’m hoping to at least give you an idea of what it’s truly like here.

1st stop was back at the visitors center for fuel in the jeep. I can’t wait to see how many total miles we travel. The drive to Ngorongoro was crazy. It’s like a road with heavy, heavy loose gravel that you thought at any moment it was going to throw us off the road. Ally actually said that this road has taken out many of drivers, but after 9 years, he’s an expert. In addition to the loose gravel, they are either with widening the road or just adding more gravel but one side of the road was piled up so you could really only drive on one side of the road – was interesting when a vehicle came from the other direction. We drove 109 miles on that one road just to get to the entrance to the Ngorongoro side of the park. We stopped for lunch at the information center where Rich and I were able to climb up to the top of a cliff to see the park. It was a spectacular view and well worth the climb.

As we entered the park it was very evident that the topography on this side of the Serengeti was completely different then where we have been. Everything would be greener if it weren’t so dry. The dust is unbelievable and so thick! We are in the dry season here now, well for only a few more weeks. Dry season is when all the babies are born which is one of the reasons I chose this time to schedule the trip. After seeing the roads here, I am SOOOO thankful we chose the dry season. During the rainy season, some of the roads become unpassable and many get stuck. Ally told us that in the evenings at the camps they are always looking around to see who isn’t back encase they need to go find them. No thank you! I’ll take the dust of getting stuck next to the hippo pool anytime…lol

So inside the park, Ally turned onto a road that ran straight through the middle of what looked like a crop field of soy bean that has already been harvested. Dry and barren but it went on forever, you could see no end. There appeared to even be very few animals; a few gazelles here and there but that’s about it. Both Rich and I thought he had lost his mind. Asked where we were going and he said out to those rocks straight ahead…way in the horizon. Rich said, that’s got to be another 50 miles. But Ally said I want to show you something…so we trucked on! And oh how happy I am we made that trip. Just around the 1st rock formation, laying right on the top looking over the plain was the most beautiful lioness. This was the picture I was waiting for. The one I have envisioned all my life. She gracefully came down off the rock and up onto another formation and we could tell she had a litter somewhere. We followed her until she returned to her spot in hopes that we would get a glimpse of the babies, but no such luck. Around another rock formation we spotted another female, sitting right in the sun, panting very hard until she just laid down. Not sure why she didn’t move out of the sun into the shade but we left he snoozing. The drive there was sooo worth it and I told Ally I would not question his judgement again. As we got back into the park area it wasn’t long before there was a pride of young lioness and two young males. We were told they were probably all siblings. Just behind them was the kill they were sleeping off…a young zebra. The flies were unreal and it was not a pleasant site seeing the entire back half of the zebra missing but we were able to actually see where the puncture marks were made in the neck to intentionally bring her down…:(

We continued on to our second camp…well if you want to call it a camp. It’s like a resort in the middle on no where with no air conditioning…lol! This camp is call Lake Maserek Tented Camp and it sits on the side of Lake Maserek. As we pulled in we were greeted by a Maasai Warrior (dressed in full robe attire – included a spear) who escorted us to the reception area. Juice, a wet rag and the rules of the camp and we’re off…again escorted by a Maasai Warrior. One of the rules here is you NEVER leave your tent without an escort because the hippos graze in the grass and brush all around the camp. This is going to be exciting. The tents here are on elevated decks, I’m sure to give you the view of the lake. We have an enclosed patio this time so we can sit outside and still be enclosed. We also have an outside shower…yep! It’s really nice. I told Rich I was having mixed emotions about this place. Though it is super nice, it’s not the true bush feeling like our previous camp. BUT it’s nice to see two different sides of a safari. I’m sure we’ll find a way to enjoy ourselves.

This is the first time we have had the opportunity to communicate outside our little world in three days. Internet service is up and I was able to finally post the first three days of our trip. I facebook messaged Krysta and she said they were starting to get worried and if they hadn’t heard anything today they were going to call the office…lol! I’m pretty sure we let everyone know we had NO IDEA what our availability was going to be. Krysta called Linda to tell her to check her email, Rich was going to contact her.

Shower was exceptional after all the dust of the day plus the outdoor feeling was really neat. Dave, I think we should build one. Dinner at 7:00 and we had to call the front desk for an escort. Dinner was great. Our little waitress is just the cutest thing. Ally and Rich couldn’t stop smiling at her. Staff here is great, just not as personal as the last camp. Ally told us that just a few months ago, one of the Maasai Warriors was actually attacked and speared by a buffalo, just outside the reception tent. Oh great! Even the Maasai aren’t safe.

Time to call it a night so our warrior escorted us to the tent. Let me tell you, it was a little different feeling in the dark. I’m going to video tape tomorrow so you can get the true affect. All zipped in, Rich is asleep, I just finished posting our blog and am facebooking with Krysta when I heard the strangest noise. Sounded like chewing! And it was. Got my trusty night vision goggles out and sure enough, right in front of our tent, grazing on the grass were two hippos. They were chewing so loudly I could hear it all the way inside. I came outside and tried to video tape so you could hear what I heard, but the only thing you can hear on the tape are the birds, which seem to chirp, or whatever the sound is the birds make here, all night. I tried to wake Rich up so he could witness it and he was OUT. He finally woke up and I said “Rich, do you hear that? and he said what? I told him about the hippos and he said ok and was back asleep just about as quick. I facebooked Krysta (10:30pm here) so she could experience it with me. In the back ground again tonight was the rumbling of lions. I am in love with this place! 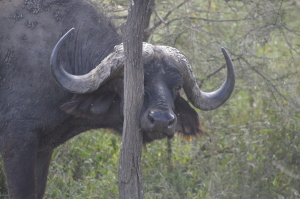