Breakfast at the lodge, pictures with the staff and we’re off on our drive to Ngorongoro Crater. The plan for the day is to visit a Maasai Village and I can’t wait. From what we have been told, the climate there is much different then what we have experienced so far. Nights and early morning is cool to cold with hot temperatures during the day. May finally wear my Northface that I lugged all the way here.

Along our drive we began to see many herds and villages of the Maasai people. It’s amazing to see these small children watching over big herds in the fields – the amount of commitment and responsibilities these children carry is amazing. Most kids in the states at this age can’t even make their beds.

As we pulled up at the village we were greeted by our guide for the day along with all the men and women of the tribe. They immediately began to sing and chant and perform their ritual dance for us. The pride of the Maasai men is how high they can jump – I’ll try to post my video so you can see how amazing. I was asked to join the women as they danced and chanted. One woman was holding my hands as she smiled at me. She finally told me I needed to jump with her…lol! I don’t think I got the full idea of what I was supposed to be doing, but it was fun anyway. Rich caught my pitiful attempt to participate on video.

After the dance, we were escorted inside the village for a glance into their world. There small huts are built around the perimeter of the camp. Inside the perimeter is a clump of trees and a small garden area. Their herds are kept in the center of the village at night to keep them protected from the predators. The Maasai are the only tribe allowed to reside inside the park because they are farmers. They are not allowed to hunt or kill the wildlife – they are only allowed to protect themselves. AND, their protection comes from spears, clubs and knives, no guns. It’s hard to image. Our right to bare arms here is for protection from eachother – sad!

Each hut is constructed by the “women”…yes, the women do all the work guys! It takes about 3 weeks to construct one hut. Inside are two bedrooms (if you want to call them bedrooms). There are two beds, one big one for the children and one small one for the parents. In between the beds is a small firepit (the kitchen). The majority of their cooking is done outside, but small fires are built inside for the smoke to help keep the bugs away. Let me mention here that we really had NO issues with bugs the entire trip. Used the mosquito wipes the first day but that was it. Tsetse flies and just regular flies were the only ones that seemed to be around. The regular flies here are very pesty though, they don’t just buzz around and go about their business, these guys just continue to land on and pester you. Anyway, back to the huts…did I mention that the total height is only about 4.5-5′ tall? Just to get inside, I had to duck to fit. I can’t imagine these tall Maasai men getting in and out of here. Inside I sat on the childrens bed while our guide explained the running of the home. There was a small window on the side and this adorable little boy stuck his head in during our tour. I think Rich got a picture of him just in time.

As we left the hut we visited the kindergarten school. My heart was overwhelmed by these small children who sang for us. They ranged from the tiniest little girl, maybe 2, up to age 6. At age 7 they can begin school, however it is a boarding school due to the distance from the village. These people are committed to an education for their children. They are taught the basics (including english) here at their village to prepare them for school. As I sat on their tiny bench beside the most adorable little boy, I was already starting to think of ways to help these children learn. I wish I had brought paper, pens, colors, whatever with me that I could have left for them. But I was too worried about my 33lb limit. What could I have left at home to have brought supplies for these kids? I’ll know next time.

We did a little shopping before we left. I would rather give my money to this group then in a store. It was funny how they negotiate. We picked out our stuff, they put it in a pile and we were surrounded my men and women discussing in Swahili how much they wanted. It’s definitely not like shopping in the states, or even in Mexico (my only experience outside the US). After negotiations were over, we loaded our goods, climbed back in the jeep and on to the crater.

The topography on the trip to the crater is very different then the other parts of the Serengeti. Green and lush as we made the climb to the top rim. As we made a turn, Ally said “Debbie, do you trust me? Close your eyes!” I did, as we have learned to count on him over the past days of the Safari. As we turned the corner he said to open them and I got my first glimpse into the crater. OMG! I was blown away! The beauty is indescribable.

We began our decent down as soon as we reached the floor of the crater the animals were everywhere. Roaming freely among eachother. We saw 8 Rhinos (including babies) that we have driven for hours previously to see. Ally said that seeing that many was really remarkable. You name it, we was it. A Thompson Gazelle was laying just beside the road giving birth…we were so excited, until we discovered the baby was still born. She was unable to actually deliver it. We watched her as she tried and tried then finally got up and walked back into the herd. We didn’t see what ever happen to her…:(

We saw a couple different prides of lions. All looking so very healthy. We saw an elephant and Ally pointed out he had a “5th” leg. Have to say that one went right over my head until I looked closer. OMG! I was embarrassed actually taking a photo, but couldn’t resist. Nature, right?

We began our drive back up to the Rim to our home for the next three days, Lion’s Paw! We were greeted again with juice and a wet rag to wipe the grime from our face and hands. I had no idea how dirty I could actually get…lol! Edward is the manager at this camp, a member of the Maasai tribe himself. He showed us around the camp and explained the rules. Our tent is great with an amazing view. We even have a heater inside the tent, which seems unreal to me with the climate we have had up to this point. We are free to walk the camp area during the day, but will need an escort at dark. The view from the reception tent is amazing so I decided to sit there for awhile and blog while Rich unpacked and got the first shower. Did I mention that we have the place to ourselves again?

Edward joined me for a little while and we talked about his life there. He is married with two children, a little girl 4 (yes, the first daughter in our ADS group) and a 2 week old son. He lives there at the camp for sometimes 2 months at a time then goes home for a couple of weeks. It takes him two days to get home because he lives in the northern part of Tanzania; a ride to Arusha then a ride on the only bus that travels to his village. I can’t imagine living this life.

The camp here is so cozy with an amazing view. Sort of gives you the feeling of “Gorillas in the Midst” without the gorillas. I can definitely tell it’s going to get cool here – I’m so thankful we have the heater. I decided NOT to wash my hair tonight because it’s late, no hair dryers and I can’t imagine how cold it is going to get. Dinner was great, conversation was good, 8:30 and we’re off to the tent for the night and it’s FREEZING!!! Thank goodness we did not unzip any sections of the tent, and they had even closed the front while we enjoyed dinner. The heater was on and the hot water bottles were in place! OMG! Tucked under 15lbs of blankets and a hot water bottle…best night sleep I’ve had since we got here! 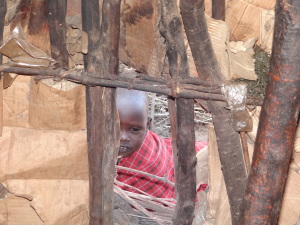 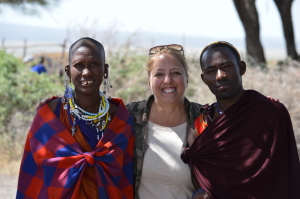 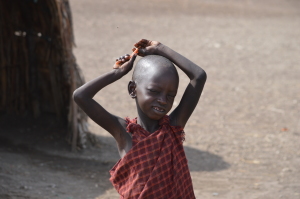 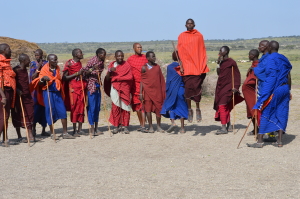