The rest of the night was uneventful, except that my phone battery died and I had not scheduled a wake up call for this morning. And it’s an early morning, breakfast at 6:30 – leave at 7. I remembered I had the cell phone given to us by ADS when we arrived (which when I turned it on, had 6 missed calls…oops). So, at 1:30 my time, I message Krysta to ask her to call me on that phone with a wake up call (incoming calls are free). She tried to call, but no international service on her phone; mom tried to call and was dialing too many “1’s” so Linda called to make sure we were up. Nice start to the morning for Rich.

Great breakfast as normal and we’re off. Drive this morning started with a drive around the lake looking for wild dogs which had been spotted earlier. No luck – so we set off on our next adventure, to what appeared (once again) to no where. Ally said, you see those mountains off in the horizon? We are heading on the other side. We are traveling to the breeding spot of most all vulchers in the Serengeti. We will have a guided walking tour by a Maasai leader when we get there. Should be fun.

There were times during our drive that Ally turned off the main dirt road…lol…just head in a direction with no roads. We would drive, and drive and drive and then all of a sudden there would be another dirt rod, just like he knew it was going to be there. We laughed because at one of those roads, not a soul in sight, we noticed Ally look to the left and right to make sure there wasn’t another car coming…LOL! I don’t get it. Anyway, along the way we saw many Maasai people and their villages, carrying water, watching their hers, etc. It is so hard to imagine this culture still lives this way. As we got closer to our destination, Ally called another drive to get the cell number to one of the Maasai in the area. What? They have cell phones out here? No electricity, no running water, no vehicles, etc but they have cell phones? Shot, we can’t even get cell service in parts of the US. While we waited, a Maasai Warrior and his son approached us from the field so Ally asked if he would give us the tour, which he graciously agreed.

We walked all the way around the rock formation but we were not able to climb to the top. There are no steps of with a clear path to the top and it looked like a snake bite or lion attack waiting to happen. We were satisfied with just the education and the interaction with the Maasai. Most Warriors do not like you to take their photos, but he agreed. One you can even see he is on his cell phone (so very funny). After I took the picture he asked Ally to see if I had a pen and I just laughed cause I thought he was making some sort of joke about autographing the photo but in reality, he asked for a pen for his son. I was elated and couldn’t wait to give him my ADS pen. This little guy was about Aidens age and was just adorable. Hard for me to comprehend how something so little to us could be so important for someone else. As we began our long drive back to camp, I was once again reminded why we put our trust in Ally. He once again delivered a remarkable experience. Back to camp for a quick lunch and a siesta before our evening drive. We were all tired from the morning drive and Rich and Ally would be fine with taking the rest of the afternoon off, but not me. I’m sure there’s something out there for us to encounter.

Lunch, a nap and an exciting walk to the tent. Today their were two more buffalo in front of our camp and we watched as the Massai tried to scare them off (threw stones, hit them with the rods) but they weren’t budging. Looks like this is their favorite spot. I video taped their efforts but I’m not sure our escort much appreciated it. He stopped and posed at me with that look…like, REALLY?

Excitement over and we’re off again. I set a goal for ourselves and it was to find a big male. Rich said I was dreaming since we hadn’t seen male in a couple of days. I believe, I believe! Had a sighting of the Wild dogs we had looked for this morning. “Wild” is a great name for them. Their coat is crazy looking and based on what I have read and have been told, they are fierce hunters. They are very rare to see so I feel lucky we ran across them. Another check in my book.

Just as we were wrapping up for the day, we ran across a pride with not 1, but 2 big males. They had come from a recent kill and were fat and happy. The males were laying on their backs with feet in the air like big cuddly kitties. Funny how the “King of the Jungle” can be so soft as the same time. Goal met and then some!

Dinner tonight was wonderful as usual. Goodbyes said since Joyce and Paul will not be here in the morning. It has been another great experience but looking forward to the crater and to Lion’s Paw. Walk back to the tent was among buffalo again, but we have become used to their company. 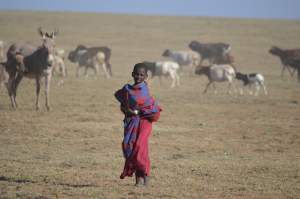 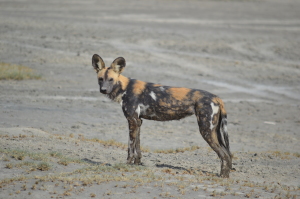 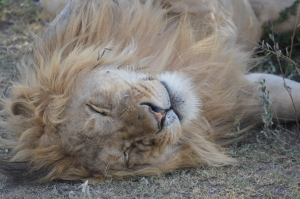